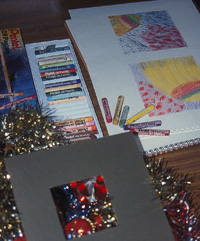 “I was a successful businessman who traveled all over the world. I had everything, a nice house, car and lifestyle that went with it. Then I lost the business and ended up homeless in Bir

mingham. I became depressed, as everything had been taken away from me. I went missing, and at one point, considered suicide but didn’t go through with it because my daughter would not have known what had happened to me

“I had never heard of Start when I was referred to it. I had done nothing I considered artistic before, but I enrolled for Mosaics and loved it straightaway.

“I went on to do Ceramics and this helped me to progress to College for a BTEC qualification in Design and Ceramics. Initially Start was a way of filling the day but it developed into much more. Start is a happy place and it makes you feel like coming back. I enjoyed the sessions very much and eventually these have led into my being a volunteer at Start. I also run workshops in Mosaics and Ceramics elsewhere.

“Becoming unwell has opened up new opportunities to me. I wish I’d done this sort of thing 40 years ago.

* Not person’s real name“The experience is very rewarding. It is a way of giving something back.”